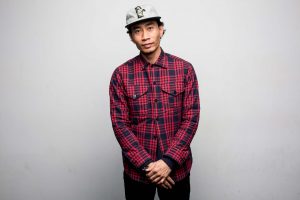 As a certified world champion (2003 DMC World Champion) and founding member of the Turntable Monkz, Dopey (born Jon Ryan Santiago) has taken the opportunity to tour the world a few times over. He has shared stages with the likes of Eminem, Slum Village, Kanye West, Kardinal Offishall, Dragonette and Steve Aoki, as well as DJ’d for Jazz Cartier.

He continues his globetrotting by carrying out his seasoned successes as a key group member of Notes to Self, a rap crew from Toronto. It is without saying that his hard work has contributed to successful release of two Notes to Self albums. In his down time Dopey immerses himself in their creative process, spending time off tour, in the studio with Notes, writing and recording. As one of Canada’s premiere DJ talents, Dopey spent 2006
– 2013 as an integral part of the Gemini Award winning TV show MTV Live.

In his 10 years as a DJ/Turntablist, Dopey has “battled” his way to the top; he’s performed alongside the world’s best DJ’s and musicians, and has now taken to the studio portion of being an artist. Currently he released “(Lament) Reprise”, a follow up to 2015’s “Dopey’s Lament”. Dopey is a rare and humbled talent that will continue to push the limits, not